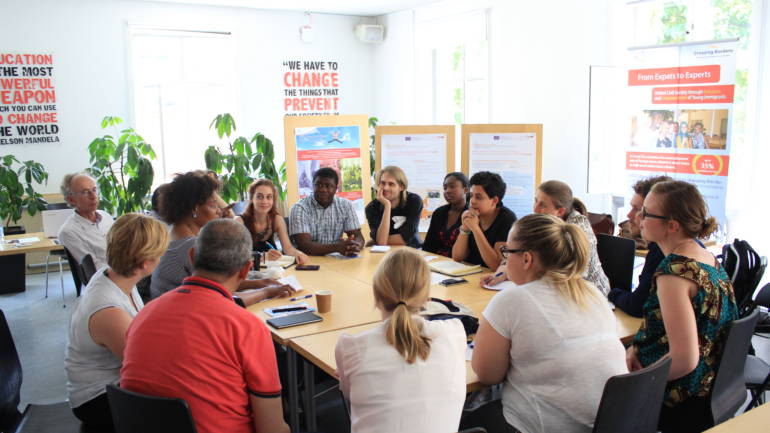 “We want respect and appreciation”

Last Friday we joined colleagues and international stakeholders for an event organized by Crossing Borders under the topic of young immigrants’ integration into the EU labour market. We had a day full of inspiring stories and open discussion in a stimulating multicultural environment, and together we have reached the conclusion that integration should be a two-folded reciprocal process.

The event held at Mellemfolkeligt Samvirke started early at 9:30, with introductions by CB’s Andrew Bende, who is also responsible for the creation and coordination of the FETE (From Expats To Experts) program, and FETE working partners, such as The People for Change (Malta), Cecie (Italy), and le cnam (France). The symposium worked under two main questions:

Why is integration in the job market important?

What factors determine an effective inclusion?

Being an immigrant in Denmark myself, I know these questions a bit too well. I know how hard it is to find a job, even when you have all the necessary qualifications. I have started working at 17, I speak 4 or 5 languages more or less fluently, I have a Bachelor and a Master’s degree, both with excellent grades. What am I missing? This is a common concern among foreigners in Denmark. And yet, I am also aware of my privileged position: I am the picture perfect good immigrant, white, European and educated. I do not have it easy, but it is important to consider how different oppressions intersect to create worse situations:

“After years in Denmark, I still found myself at level 0. There were always people with more qualifications, they said; but I have 3 degrees from different countries and a lot of experience – what they mean is that I don’t understand Danish work culture to perfection. So I started asking myself: What is it that they want from me?” Andrew Bende (Uganda, living in Denmark)

Talking about immigration in Europe, there was a general agreement that the continent is not doing the best it can; integration is important, but it is the way we go about it that makes all the difference. Marie Louise Lindeløv, from the Danish Employers Confederation, said that a large percentage of immigrants, and particularly refugees, do not possess higher education and have limited job experience that is hard to use in Denmark. She also insisted on the importance of language classes as a way of not only integrating into the job market, but also of establishing a long-lasting network.

“We must ask ourselves some fundamental questions: What do we actually want from immigrants? Why do we keep on ignoring their skills? Why do we put them inside an irreducible box of otherness?” Omero Marogui  (CNAM France)

Both language and network have been crucial for the rest of the discussion. In the afternoon panel debate, it was mentioned that around 80% of jobs in the world are gotten through personal and professional networks, which explains on one hand the difficulties that immigrants have getting a job – since they are new and don’t have these networks – and the importance of getting to know people in Denmark.

Regarding language, the discussion was divisive. Although some have insisted in the importance of language to construct your network, a lot of people, particularly people of colour living in Denmark and Sweden, mentioned that the problem is way beyond language barriers. Sometimes the colour of your skin or your ‘ethnic’ last name can be something preventing you from getting a job or from getting the education you want. Betty, from Cote d’Ivore said she was looking for an internship for over 3 years in France, although French is her first language; Emanuel, a Zambian man living in Denmark, mentioned that African kids are often pushed to handy-work courses in Europe instead of being encouraged to follow their dreams; Bwayla Sørensen, a Zambian activist living in Denmark, mentioned several instances of discrimination within the system, from the ‘Jobcenter’ to the university, and how these invisible walls can inhibit your motivation.

When I went to the college to fill in the papers for my application, the secretary looked at me thunderstruck and asked if I knew I was trying to apply for higher education, she couldn’t believe that an African could go to college. When I wanted to build a website for myself and the municipality was offering courses, the job centre was stalling my application process. When I found out and went to talk to him, the guy told me: You will never amount to anything

We were also greeted by some of FETE’s participants, who shared their stories with us. People from all the over talked about the importance of meeting people in similar situations and how much working can make you feel like a valuable member of society. As Elizabeth pointed out, no one wants to stay at home do nothing:

“I wanted to study, to do something, but I couldn’t, my papers didn’t let me. Now I’ve started helping other people. I don’t want other immigrants to go through the horrible things I’ve been through, it’s been tough.” Hussein (Iraq, living in Malta)

“I studied in a good university in Brazil, I had a job. And then all of a sudden that was nothing when I came to Malta. I wasn’t even allowed to work.” Carolina (Brazil, living in Malta)

“The first thing I had to think about when I got here, at 20 years old, was – how am I going to restart my life again?” Saria (Lybia, living in Malta)

The entrepreneurial spirit is highly valued in Denmark and according to most speakers, you often have to make an effort and develop your own initiatives. In Adbullah’s words “If you can’t find a job, make one. Look at things, wherever there’s a flaw, that’s when you come in, that’s work that’s necessary”. Abdallah Sobeih, born in Egypt, traveller and business man, also stated that discrimination is present everywhere, taking many different forms; he’s now starting an Eco-hub in Humlebæk, an incubator where everyone with a green mind can come and develop their ideas. But it is important to consider that this entrepreneurial spirit is something that can come out of necessity, rather than pure willingness:

“In all my years in Denmark, I never had a job where I was really hired. I have been a consultant for many years, but I was a consultant because that was the way they found to keep me locked while they waited for a whiter alternative. I stopped comparing my salary to my co-workers, it was depressing.” Bwayla Sørensen

The general motto was “don’t give up”. Every speaker mentioned the endless possibilities and power that come with participation and organization. Elizabeth Kaleebi, a Ugandian living in Sweden, has worked for women’s rights and empowerment and HIV awareness, talked about the importance of social and political participation, something shared by all speakers – finding your voice and make sure that you are present when decisions are being made. But she also highlighted the intersection of oppressions, making it harder for women to network and develop in Europe.

Sometimes due to white-saviour complex, sometimes due to straight up racism and gender discrimination, immigrant women of colour have a hard time when it comes to self-determination. Carol Krogstrup, who is part of the integration centre in Helsingør, talked about being a female pastor in a conservative context.

“The first time they saw me in church, they told me to go join my sisters in the kitchen. But I believe everyone has something to give, and I believe that very strongly. These men, also politicians, can have strong opinions and loud voices, but so do I”

In our discussion groups we have talked about necessary policy changes, changing the paradigm from migrants’ duties and obligations to include the responsibility that the hosting society bears. The fear of multiculturalism in Denmark must be fought through mutual respect and appreciation. Pål, from Copenhagen’s Trampoline House, gave the example of his organization, where refugees can come to a communal house and participate in the small community’s daily life sharing an equal amount of rights and responsibilities – they are given a chance to be autonomous and responsible for themselves and, at the same time, can expand their network and make Danish acquaintances.

Regarding the difficulties that immigrants, and particularly refugees, have in the job market Michala Bendixen, from refugees.dk, also pointed out how the system is rigged against them from the start. From the long waiting periods and the isolation from local communities, to the high Danish working standards that ignore culture and laws that target migrants – everything is part of a system that constantly disempowers refugees and that asks them for everything in return. People lose their self-esteem, are excluded from their own integration process, moved around from place to place, and are constantly hearing negative conversations about them and their place in society, factors that combined, really take a toll of refugees’ mental health and create psychological barriers to the integration process.

In our final conversations we have reached the decision that the community also needs to be held accountable for its citizens, and that includes immigrants and refugees. Instead of focusing so much on foreigners’ responsibilities towards European states, the states itself and the civil society should wonder how to make them feel valuable and welcome. Regarding this, we have agreed that a correct approach involves valuing cultural exchange, educating towards intercultural communication, and making employers aware of their own biases when hiring people similar to themselves. On a policy level, participation and making yourself visible in your community and society came up as an essential aspect, while pushing for affirmative action came up as a necessary tool to integrate foreigners in the job market.

Any cookies that may not be particularly necessary for the website to function and is used specifically to collect user personal data via analytics, ads, other embedded contents are termed as non-necessary cookies. It is mandatory to procure user consent prior to running these cookies on your website.